We recently lost a friend to suicide.

Our best friend, Megan, and us, actually made this scale together years ago. We have used it to help each other through the toughest times.

When it was really bad, we could just look at each other and say “What number?” and we always knew what the other one meant. We also knew exactly what the number meant when we gave each other one.  If the number was too high, we made plans for that evening, so we wouldn’t be alone.

This scale got us all through a lot.  It got Megan through a massive depressive spell, and it got us through discovering we have Dissociative Identity Disorder.

But it was just something between us, between Emmengard and Megan.  We were too embarrassed and maybe even ashamed to really talk about it, because talking about it meant admitting that suicide is a thing we struggle with. The stigma of it all just felt too great. We weren’t out about our DID either.

Now that we lost Kevin, that just doesn’t seem to matter anymore. I wish we had made this earlier. I wish we had shared it with all of our friends, because then maybe Kevin would have known he was not alone. Maybe it could have all ended differently.

We are sharing this now, because we hoping that this could help other people. Maybe it could start a conversation. Maybe it could give friends, like Megan and us, a tool for really talking about this honestly.

Maybe it can help things turn out differently for someone else.

We miss you Kevin.

For screen readers or other read to me apps:

1. ⁠I am so happy that I will literally go insane if the happiness is sustained for any length of time.

2. ⁠I am feeling pretty rad. I vaguely recall times I’ve been unhappy but it feels like distant memories now. Things are looking up.

3. ⁠It is not the best day of my life… I have stuff on my mind, but I don’t think of suicide, except when that one weird friend brings up stupid hypotheticals.

4. ⁠Suicide doesn’t occur to me except in moments of frustration or stress. It’s like a weird escape hatch my brain has decided to just go to in an attempt to escape stress. It doesn’t feel serious, it’s almost a joke.

5. ⁠The joke is getting really stale. Suicidal ideation and other intrusive thoughts keep happening, but I am mostly interested in other things. It’s like a low key death affinity.

6. ⁠I am thinking about suicide a lot. It has become troubling. I can distract myself if I really try, however if an out of control semi was headed towards me, I might not move. I am passively suicidal.

7. ⁠I cannot stop thinking about suicide, and unfortunately I cannot distract myself. I might be doing more risky things like driving recklessly or drinking to excess. I have graduated from passively suicidal to having a death wish. I need help.

8. ⁠I am no longer fighting the thoughts, just sort of indulging in them. I sort of want to make the suicide plan, but I am stopping myself. I am holding on, but barely. It isn’t safe for me to be alone. I am suicidal.

9. ⁠I am actively making a plan to end my life. I am telling people goodbye, settling accounts, and starting to write THE note. I am actively suicidal. I need to tell someone.

10. ⁠I am actively trying to kill myself. If I do not get medical attention it is very likely I will die.

We try to keep all mental health related material free and open to the public, and vulnerable people who desperately need resources. If you appreciate what we do and would like to support us, you can make a donation using paypal, just click the donate button.

If you want to purchase a poster of the suicide scale, you can buy one on our Redbubble account: 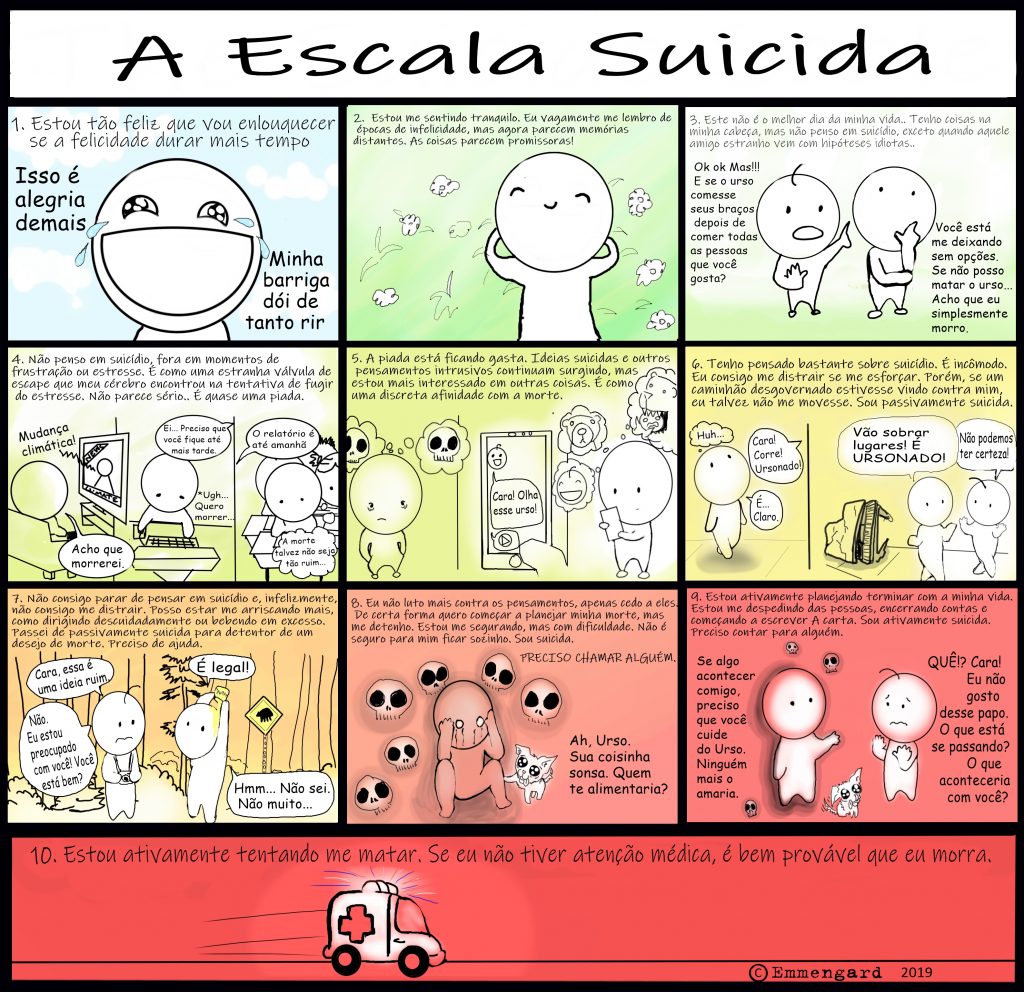